Since Bekah turned 3, we have only allowed her to use her 'mimi' (pacifier) at night when she went to bed, or if she happened to get tired and need a nap. (not very often; she basically hasn't taken a nap since Sarah was born) Well, for a week now, she has not used a mimi at all!! Yeah!! 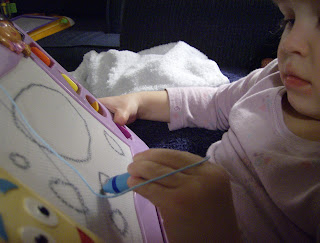 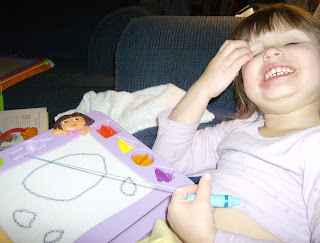 Recent pictures of Bekah drawing on her "magnet" board. She has been doing an amazing job drawing shapes. She is coloring in between the lines and no longer simply scribbling. She is growing up so much!!
Posted by B,P,R,S & L at 9:31 PM No comments:

All in the same week??

Because Easter is early this year, Palm Sunday, St. Patrick's Day, the First Day of Spring, Good Friday, and Easter are all within 8 days of each other. Weird!!
Posted by B,P,R,S & L at 6:38 PM 1 comment: 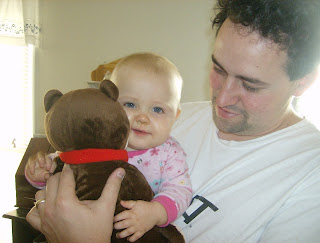 Watching a movie with Aunt Faithe
3) Last weekend, Bobby's sister and her hubby came to visit. We only got to see them for 8 hours at Christmas, and it was since July before that, so it was really nice to spend more than 24 hours with them. Bobby's parents also came up for a few hours during the day.

4) Just a couple cute pictures of the girls lately. 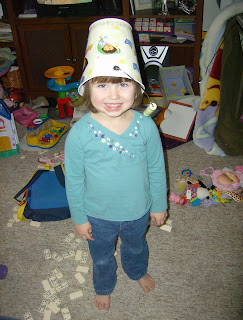 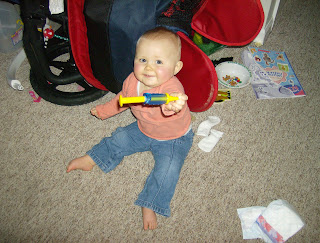 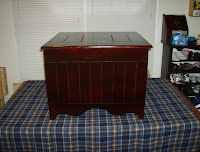 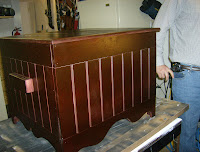 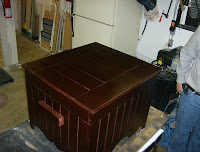 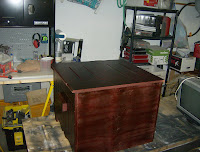 Bobby's been building a toy chest for a guy at work that used to be his boss. His wife is due in less than a week with their first child, a little girl. He gave it to him last week, but I wanted to share it with you. Where the pieces come together is lighter than the rest, but it is not as light as it looks because of the flash. Anyone else want one? :~)
Posted by B,P,R,S & L at 9:36 PM No comments:

Lots of things have been going on for the last few weeks that I haven't blogged about:

1) In the last 2 weeks, we've had 3 snow/ice days, a day where we were dismissed at 12:30 due to the ice, and a day off for President's Day.
This picture is from this past Thursday when we went home early. The ice was actually pretty bad, worse than what it looks.
When I scraped my car off to head home, by the time I got in the car, the windshield was iced over again 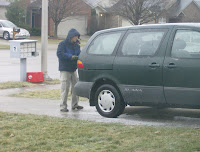 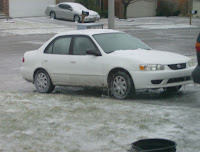 This picture is from February 12th. It was icy, snowy, and very cold. 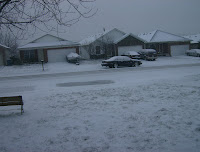 This last one is from February 13th. The snow covered over the ice.

The area we live in has lots of curvy roads, so when things like this happen, the people out in the middle of nowhere can't get anyway. Because of this, my school doesn't delay. We just close. So, now we are going to June 5th. And we started August 15th with kids. !!! 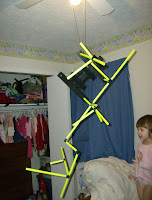 She used these yellow things, not sure what they are, to build something, and then was trying to hang in from the pull chain on her fan/light, so I helped her put it up. 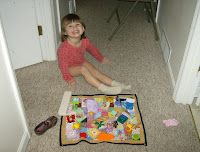 They she also has been using the little quilt that my friend Denise made her to have a tea party. She puts a bunch of little things, including play food on it and pretends she's having a tea party. 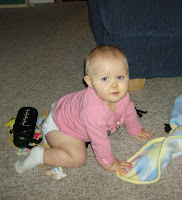 Sarah will be turning 1 in less than 1 1/2 months. With this comes the removal/stopping of certain things. It is bittersweet that she is growing up so fast, but it also so wonderful that I will never have to deal with these things again. (mostly the money involved with them)
1) Formula, no more buying formula!! We are on to Vitamin D milk until she is 2.
2) Dreft, no more buying special detergent!! I used to just wash Sarah's clothes in the Dreft, but now, so I don't have sort, I wash all of Sarah and Bekah's clothes in Dreft. After March 24, I will be able to use the same detergent for everyone.
3) Fewer bottles. When Bekah turned one, we basically cut her "cold turkey" from the bottles. I don't think it will be like this with Sarah, but there will be fewer.
4) Baby food. I will be buying less and less baby food as Sarah hits one. Today, Daddy gave Sarah one of Bekah's chicken nuggets and she did a great job gnawing on it.
5) More food similar to Bekah. Until now, when Bekah was eating something, Sarah was always very interested in what Bekah had. The only problem was that it was usually something that Sarah can't have.
Posted by B,P,R,S & L at 4:34 PM No comments: 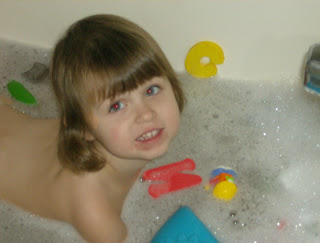 Bekah's new favorite thing, being in the bathtub, laying on her back with her head in the water. 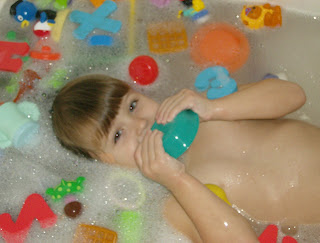 So, the snow/ice that has caused me to be home from school for the 2nd day in a row now, is also causing our busy week to become relaxing. All activities, besides Bobby going to class yesterday afternoon and this morning have been canceled.
Posted by B,P,R,S & L at 10:50 AM No comments:

Not Much New, but a Busy Week

Why a busy week? 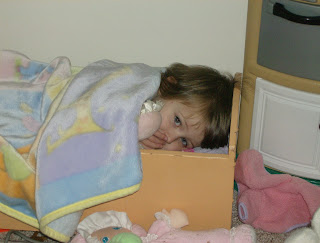 1) Bobby started his semester today, so he had class from 2:30-5:15 and then headed to work.
2) Tomorrow he has class from 9:30-10:45 am (and we had to struggle to find someone to watch the girls because our sitter's kids are very sick), and then I have a meeting after school until 5 pm, so Bobby has to take the girls to 2 different houses tomorrow.
3) Thursdays I stay after school with kids getting ready for solo and ensemble, so Bobby brings the girls to school and then heads to work.
4) Friday Bobby has class again from 9:30-10:45 am, and then Bobby's sister and her hubby arrive for the weekend that night.
5) Saturday, Bobby's parents are coming down for lunch. 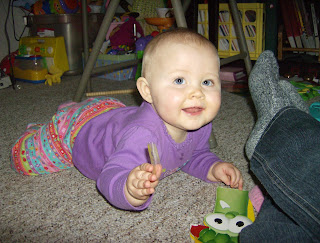 6) Sunday, Bobby has to do powerpoint at church, and his sister and hubby are leaving after church.
We will have Monday to recover from a busy week.

If you think of us, say a prayer for Bobby. It's going to be difficult for him to get back into the swing of things. Last semester, he only took 1 class, and it was for the most part online, so it's going to be really different for him to be out of the house for more than 6 hours per week just in class, let alone the studying, etc.
Posted by B,P,R,S & L at 11:03 PM No comments:

Taxes are done and e-filed!!

The last few weeks have been crazy. I already let you know about Sarah having a stomach bug and then Bekah and I proceeded to get the bug 5 days later. It took Bekah several days to get back to normal, but she is finally back to normal.
This past weekend, we went to Ohio. My parents are in the process of doing several things around their house, and this weekend Bobby and Rich were helping my Dad drywall and paint in the garage to get ready for new organizational cabinets.
On the way back, because the girls were a bit cranky in the car, instead of grabbing fast food, we stopped and ate at CiCi's in Florence. Sunday night, when we were going to bed, my stomach was in so much pain. (we think food poisoning) I proceed to be sick every hour for several hours during the night. I did not sleep much. On a normal Monday, I would have just made sub plans and called in for a sub, but it wasn't a normal Monday. The library/media center at my school was hosting an African-American Read In that night and my 8th graders were scheduled to sing "Elijah Rock." I had to go in and work with them and then show up that night to "wave my arms."
I went in at NOON and barely existed through the rest of the day, and showed up that night and helped the kids sing. I fell asleep on the couch at 9:30 pm and woke up and went to bed before Bobby even called to tell me he was on his way home. It really helped on Tuesday at school.
But then..............we had a tornado warning and sirens going off at 1:30 am this morning. I got back to sleep at 2:00 am and then Sarah started crying at 5:00 am. Needless to say, I was tired today!!
And one last complaint, now I am stuffed up!! I am tired of being sick. I think I've had 4 colds this year!!
Well, I will have a happier post another day. Bobby is going to take Bekah to see "The Pirates who don't do Anything" this weekend, and he starts 2 of his last 6 classes next week!! Yeah!!!
Posted by B,P,R,S & L at 9:52 PM No comments: