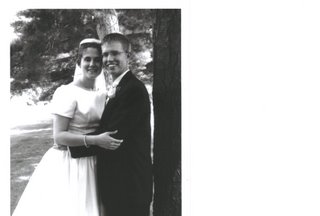 Let's try this again. I typed, went to spell check, and it was gone. That'll teach me type more than a few sentences.

I probably don't say it enough, but I love my husband very, very much. We just passed 4 years of marriage and 7 years of being together a few weeks ago. He is an amazing man who loves the Lord, and I can't imagine my life without him. For our anniversary, Bobby planned a trip.
We dropped off Bekah at my sister and brother-in-laws in Columbus, and then drove back down to Cincinnati. We check into the Radisson on the river, went to amazing dinner on the river, and then to the Cincinnati Opera House to see Puccini's Tosca. It was woderful!! I'm sure I enjoyed it more than Bobby, but he was extremely thoughtful in thinking of it.
The next morning we went swimming in the pool, went out to lunch and shopping, and met my parents for dinner at Mimi's Cafe. We celebrated both Bobby's birthday and my parents anniversary. Both are June 20th.
This post is prompted by my current situation. I had my gallbladder removed this past Thursday. This means that I can't do as much around the house as I usually do in the summer, and I can't pick up Bekah. Bobby has been wonderful, I just have to remember that he is the type that needs to be asked to do things. He will not "just do" them. He doesn't think about it. He is sometimes called the absent-minded professor.
I love you so much Bobby, and I can't imagine my life without you. The first 4 has gone so fast, the next 25 will go by in a flash.
Posted by B,P,R,S & L at 7:47 PM