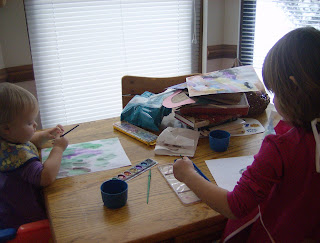 So sorry that I've been so bad about updating. Who thought I would actually do less posting as a stay-at-home-mom/nanny to my nephews than while teaching full-time? Not me.

Bobby started his FINAL SEMESTER of seminary this week. Woohooo!!!! He is excited, but this is his heaviest load since Bekah was born, so say a prayer for strength. He is still waiting/looking for full-time pay that will allow us to buy a house and move out. We are starting to think it will not happen until after Leah makes her arrival, (probably at the end of April, early May) but are still open to what God may hold for our family. 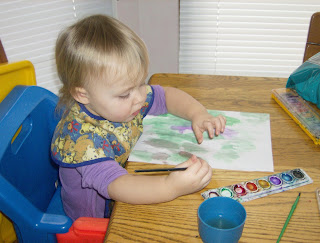 Sarah is getting over a cold that Bekah passed to her. Bekah's consisted of 2 days of fever and then 6-8 days of runny/stuffy nose and coughing. Sarah is on the 3rd day of the nose stuff and coughing. Her appetite has been next to nothing, which is VERY unusual for her. She usually eats everything!! She is still potty training well. We have started to do pull-ups during the day and diapers at night. I am very excited at the thought of only 1 in diapers, but I am not holding my breath. :) 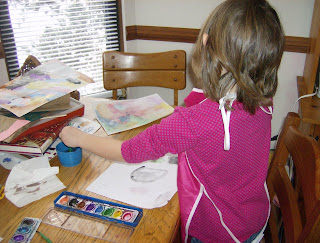 Bekah is continuing to grow and learn. She is starting to sound out 3 and 4 letter words with no help and can spell several 3 letter words also. Her birthday is 9 days past the cut off for kindergarten, but we are considering petitioning sending her early. I definitely think she's ready educationally. It would be nice to just have Sarah and Leah during the mornings every day. If they won't allow it, or we decide she's not ready, then we will definitely be doing the preschool at our church which has a 3, 4, or 5 mornings per week program. I'm leaning towards 4, but it will depend on my stress level with having a new baby, etc. She is finally getting over her cold where she probably lost a couple pounds, but she is normally a picker when she eats, and it has been even worse over these last 9 days.

I am still swimming every week, but I have cut it down to Mondays and Fridays. Wednesday were getting too tiring because I stay at my sister's house with all the kiddos for dinner and take them to church. I was leaving at 6 am and not getting home until 8:45 pm. I was tired!! Now I just walk on my sister's treadmill on Wednesday mornings before the boys wake up.
I have my glucose test on February 20th, and I am really hoping and praying that I do not have gestational diabetes with this pregnancy. The doctor said that there is a 40-50% chance I will because it's mostly hereditary. I am still hoping I won't though because I feel I didn't doing anything different "foodwise" with Sarah's pregnancy, I just wasn't active. It was the year I had a 20 minute lunch at school, and by the time I got home, I just wanted to collapse on the couch and read/watch TV with Bekah until dinner, then work on school stuff after she was in bed. I did not want to exercise at all!! With Bekah I had exercised at least 3x per week. I am hoping the swimming/walking 3x per week will keep me from having to regular my sugar levels via my carbohydrate intake. I love my carbs!! Please say a prayer for me in this area!!
Posted by B,P,R,S & L at 8:45 AM